or an indecisive biff on the plains of Salamanca


Last weekend saw our first friendly competitive game of Sharp Practice - albeit still very much with our learner's plates on! Michael, a friend from work, came around for the afternoon to get a feel for the rules and mechanics and for his first foray into historical wargaming (he is otherwise steeped in Warhammer 40K experience).

Given this, we kept it reasonably simple: French vs British in the Peninsular War (c.1810); and randomly selected the Mission scenario from the core rules. We used the Dawns & Departures rules for determining terrain, giving us a fight on the Spanish plains, with a small walled Inn at a road intersection towards the centre of the table, a good scattering of fields, and a walled farmhouse and small outbuilding on the left. 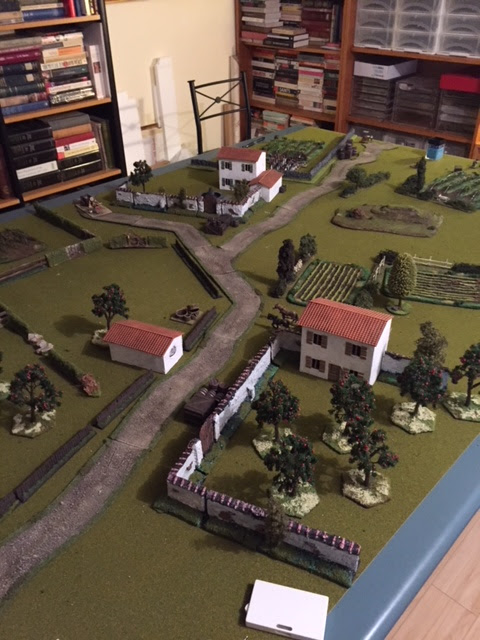 With the surrender of the town and citadel of Ciudad Rodrigo last night, I advised the Marshal’s headquarters that, over the next few days, I would join one of our foraging parties to get a better sense of the country between there and Almeida and of the British forces operating out of Fort Concepcion, just beyond the Dos Cases River. This morning I heard that some units from Junot’s Corps were operating in and around Barquilla, and as I knew some of Junot’s officers, I felt this could be a perfect opportunity.

After attending to my morning rituals [Fortier’s moustaches notoriously required significant daily attention which he described as his “rituals”], I mounted my trusty Hecate and headed out on the road to San Felices el Grande, with my servant Rodriguez following by mule. My intention was to strike north first – I had heard told the morcón [sausage] at Castillejo was well worth a visit, and a rare instance of a Spanish rumor that turned out to be true – then cross the River Águeda to the west of Serranillo and from there to Barquilla.

At Serranillo I came across a detachment of the 22e Ligne who had been ordered further north to secure some supplies near Villar de Ciervo, in expectation that some of our troops would use that northern route to Almeida. Hearing of my interest in catching sight of any British troops in the vicinity, they invited me to join them on the morrow. I felt it was less likely the British would stray that far north, and in any case, the detachment's commander was a rather priggish fellow, and a tea-drinker to boot (d_____d suspicious if you ask me), so I begged off, saying I thought Barquilla would be better hunting, and I also hoped to find there Capt. Gouache, who owed me 10 Gold Napoleons! 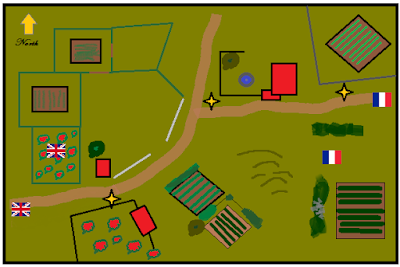 Michael had chosen the French, with a Regular force of two units of line infantry, each of two groups, and a unit of Voltigeur skirmishers, also of two groups. The skirmishers were under the command of Lt. Bastien (II); one of the line units was under Lt. Michelle (II); and the final line unit and overall command was with Capt. Jean Luc Picard (III), supported by Sgt. Remy (I). He had a starting Force Morale of 11, and 6 points of support, with which he took a secondary fixed deployment point, a physic, and two musicians.

I had a British Regular force: a three-group unit of Regular line under Major Denis Bloodnok (III); a two-group unit of Light Company in line under Lt. Frogmore (II); and a small detachment of KGL Light Infantry skirmishers under Lt. Von Klappers (I). Apparently Bloodnok had heard that the Inn had a wishing well full of coins, which was why he had strayed from the main British force further south! I had a starting Force Morale of 9 and 4 points of support, so took a fixed deployment point, a physic and a musician.

The scenario has a delayed start for the British, which the French took good advantage of, getting fully deployed, securing the first objective, and advancing well towards the second before the first British forces entered. 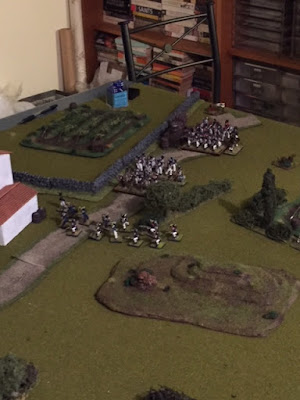 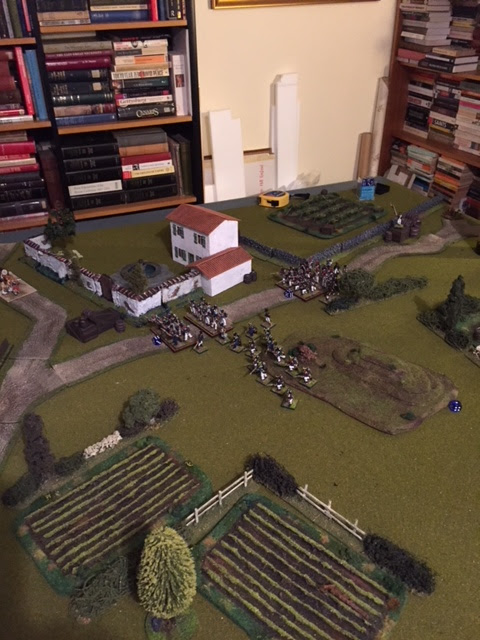 The French poised to capture their second objective 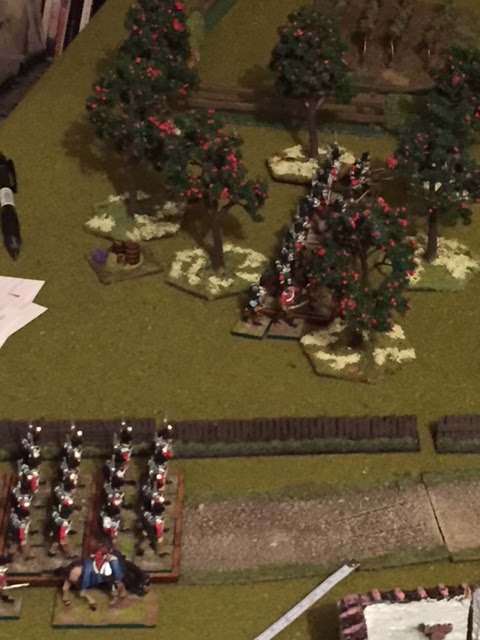 The British start to arrive and deploy

At this point, Michael pushed his front line unit ahead to delay the British advance in preference to securing his second objective. Lt. Michelle's unit opened fire at long range on the Light Company forming up in the orchard, inflicting some light shock. 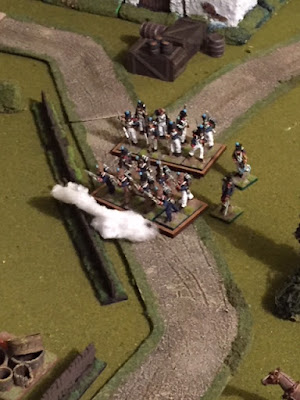 The first shots of the day

The British then had a run of lucky cards, allowing them to advance their main striking force while the French forces stalled. 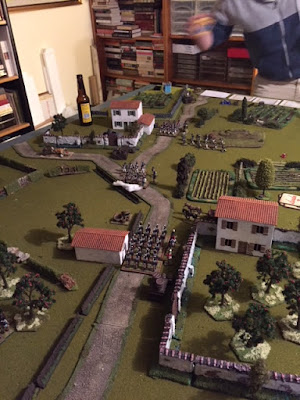 The British Regulars advance in column up the road

The British advanced up the road and then deployed in line without any response from the French. Bloodnok's luck continued, allowing his unit to present and deliver a directed crashing volley at short range with their first fire. The French unit took three casualties, and a massive amount of shock, with its first group breaking and fleeing to the rear. 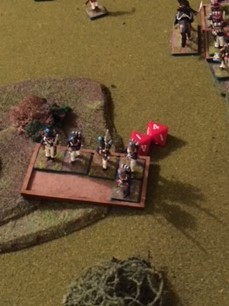 The aftermath of the British crashing volley

Michael was able to bring Bastien's Voltigeurs forward to relieve pressure on the remnants of his Line unit, and together these started to pour some effective fire into the British line. 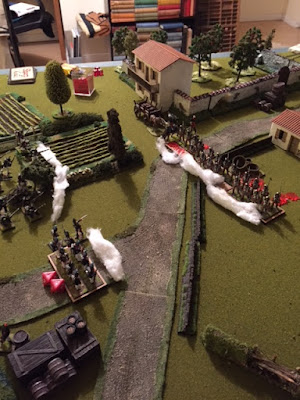 At the same time, I was struggling to get my other units up to support Bloodnok's Line, which was starting to see casualties and shock starting to build up, including a light wound to the Major causing him to drop a status level. 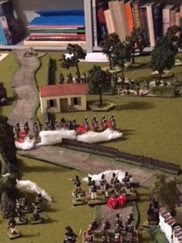 Trading fire while the British Light troops skulk at the rear 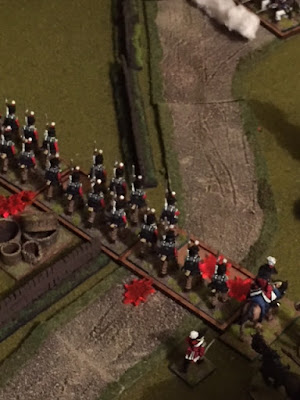 It wasn't long before the remaining group of Michelle's unit also broke and headed for the rear. 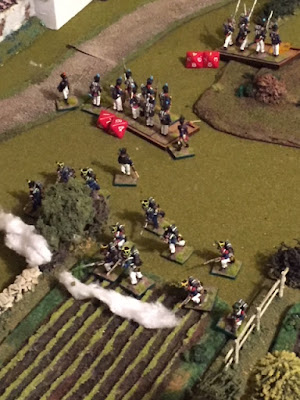 By this stage, the French had secured the second set of stores and Picard's unit of Line - still in column - opened fire on Bloodnok's troops. 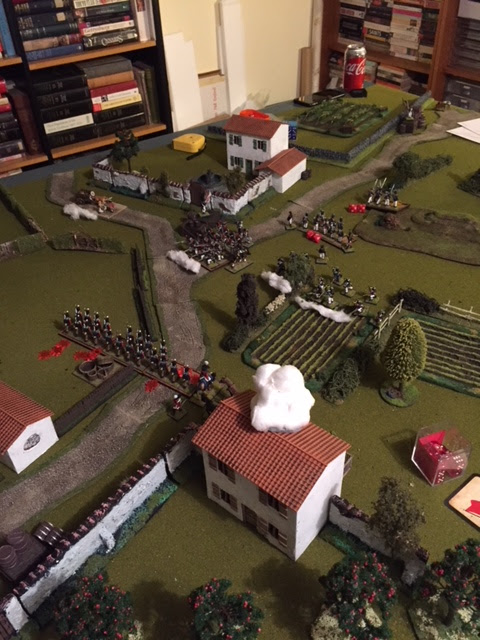 A fire broke out in the farmhouse on the British right, and the Voltigeurs' fire had been so heavy that their front was covered by a thick smoke reducing their effectiveness. With Bloodnok's line starting to look fragile and the other British units hedging around at the rear, Michael decided to take advantage of the lowering sun to launch a charge with his remaining line unit. It was a bold gamble, with bloody results for both sides, but unfortunately for Michael the British came out just in front (7 kills to 6). One French group was wiped out and the other thrown back. The British formation was also broken, with one group reduced to 2 men fleeing to the rear. 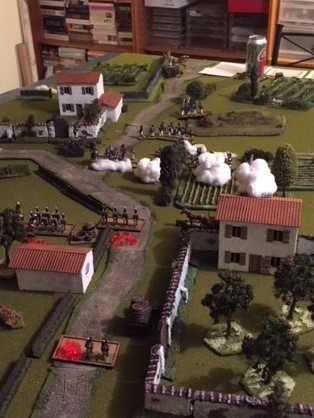 The aftermath of fisticuffs

Although Lt. Frogmore's British Lights had finally started to advance, we were out of time and decided to call it a draw. Although it had come at some cost, Michael's French had secured two of their three objectives and had largely shattered my main British unit. We were both sitting on a Force Morale of 6. 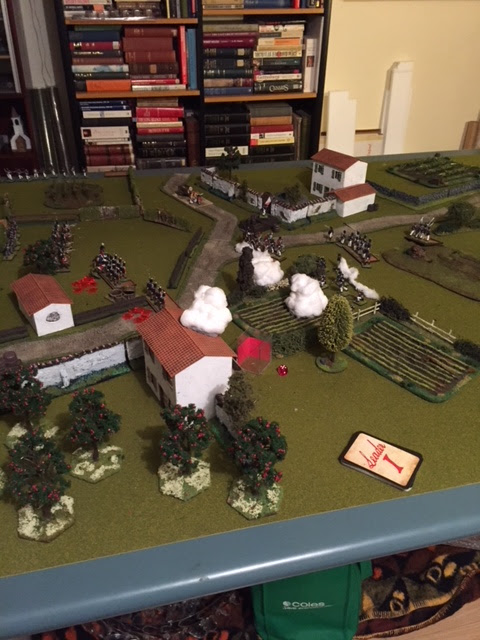 After a number of solo games it was great experience to play a game against a real opponent - it adds a real fog of war and certainly adds tension to the turn of the cards - and we are definitely starting to get a better sense of the rules and mechanics. I know we made a number of mistakes, but that is also part of our learning process. I'm sure there are mistakes we've not yet uncovered but which will come out in future games.

It has also been a good experience to put together this, my first After Action Report. However, I will leave the last words to the good Captain:

11 July 1810, Cismeiro, North-east of Ciudad Rodrigo
[Following a dramatic account of Fortier's time with Captain Gouache at Barquilla and the latter's formation of a square to fight off repeated charges by British cavalry under Major-General Robert Crauford...]

...We have also heard that Picard's little detachment also had a run-in with the British further north, though, in keeping with that gentleman's rather buttoned-up demeanor, I dare say not with the same dash and drama as Gouache. I understand he had managed to secure most of the supplies in the area when he was challenged by a British force of similar size. By all accounts they fair bloodied each other's noses - and again by all accounts fair-sized noses to bloody! - but perhaps there was more fight in the man than I earlier gave him credit...